Wanneroo Crane Hire is proud to be part of the Rainbow Container Project in Fremantle.

Marcus Canning’s ‘Rainbow’ (#containbow) was installed between the bridges at Beach Reserve overlooking the Fremantle port on Friday 12 August as the newest and largest commission for the City of Fremantle Public Art Collection.

Fremantle Story were on site from sunrise on the day to run a live webcam of the install that had hundreds of people logging in to watch from all over world on the day. The crew also captured the entire install using multiple cameras and you can see the spectacular results on the Fremantle Story YouTube channel. (or the video below) The video is set to the sounds of Canning’s favourite Perth band, Fait and features not only drone, but also crane cam, footage captured from the very top of the biggest crane used on the day!

Canning’s monumental sculpture is constructed from nine customised and coloured sea containers that form the shape of a giant rainbow. Designed to be an instant icon, ‘Rainbow’ has already garnered interest far and wide.

This was not a standard public art install, but a carefully choreographed industrial spectacle that ran over an intense twelve hours. Starting in the early hours of the morning as the sun rose over the scenic Swan River, the sea containers arrived two by two by truck and were lifted onto the reserve awaiting placement in the arch.

The growing crowds were mesmerised over the day as they watched Simon MacFarlane, the boss man at Wanneroo Cranes choreograph each of the three crane operators lifting containers into place with the command of a symphony orchestra’s conductor. The team operated under the watchful eye of Canning, seen at times with his newborn son on his hip. He was joined by other fathers and sons who worked on the project – structural engineers Brian and Oliver Nelson of Capital House and Colin and Geoff Clince of Clince Contracting who completed all the foundation works. Dion Clifford from True Blue Containers and Peter Camarri from CME Boilermakers also arrived with their families and colleagues to see their hard work finally come to fruition. 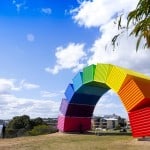 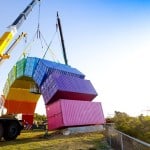 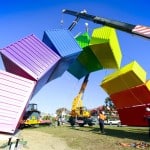 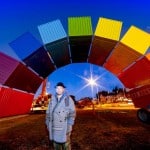 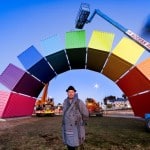 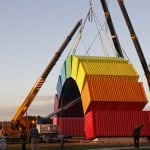 Canning’s artwork now welcomes visitors to Fremantle whether they’re arriving by train, car or boat. It overlooks the Swan River as well as the container port from which it draws part of its inspiration as a universal symbol of hope and acknowledgement of Fremantle’s artistic as well as maritime heritage. Conceived, engineered and produced in Western Australia, the sculpture stands as a monumental testament to what successful and innovative collaborations between local arts and construction industries can produce.

‘Rainbow’ has already become a Fremantle reference point and meeting place for the community with hundreds flocking to the site over its first weekend to enjoy the new entry statement and get their photos taken with the work. These photos have been generating a lot of interest on social media and include a wedding party, children dressed as fairies, an MC crew with their bikes all lined up underneath it, a man dressed as a knight and a portrait of Tame Impala frontman Kev Parker in front of ‘Rainbow’ that’s already received over 68,000 likes on instagram!

Canning says “Nothing like this had ever been attempted and it was the hard work, skills and passion of some brilliant local companies and contractors that brought the vision to reality. Rainbow’s head engineer Brian Nelson refers to the structural form as being weirdly simple and the sculpture itself as being simply weird. That’s a pretty good one liner to describe a lot of great art – weirdly simple and simply weird.”

“I grew up in Freo, it’s a place that’s dear to my heart, it’s an honour to have been given this opportunity and I hope that I’ve done Freo proud. Now it’s finally up and people are debating its symbolic meanings, the engineering behind it, the things that a rainbow made from shipping containers makes them think and feel and talk about and celebrate, seeing all the smiles and laughter and rubber necking and what an instant hit its been on the internets, I’m really excited by how much this work will continue to resonate with locals and attract visitors to Freo for years to come.” said Canning.

The design was selected by open tender from 28 applications received by the City. The selection panel for this major commission was made up of public art professionals, historians and art experts from the City of Fremantle Public Art Advisory Group and staff.

Pop down and see it for yourself at Beach Reserve, there’s plenty of parking at the East Street Jetty car park on Beach Street. It’s a short walk up the ramp behind the café. If you post your own ‘Rainbow’ photo to social media, remember to use #freorainbow and #containbow !